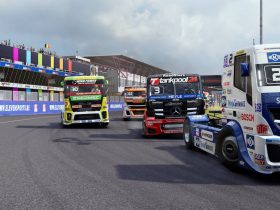 Ultimate Games, Art Games and Asmodev have announced that Infernal Radiation is in development for Nintendo Switch.

Set in a world that has looked to combine gothic and dark fantasy elements with horror and black humour, you play as an exorcist on Halloween Island after an explosion at a power plant.

The power plant produced energy from hellfire, and, thanks to the incident, infernal radiation has now contaminated and possessed those that lived on the island.

With the chance to explore the island to discover its history and rescue people from the demonic forces, you will have the chance to develop your character before battling against 20 demons.

“The key feature is the battles against demonic bosses, which are divided into phases and very dynamic. Infernal Radiation employs the easy to play, hard to master formula,” explains game creator Wdw.

“The gameplay rules are not much more complicated than those known from classic arcade games, but we strived to turn them into the most epic experience.

“Our biggest inspiration was Deep Dungeons of Doom, but we were also influenced by rhythm games. You’ll need to learn the enemy’s behaviours and proper timing. To help you achieve this, we have implemented a character development system known from RPG games.”

Infernal Radiation will release on the Nintendo eShop for Nintendo Switch in 2020.