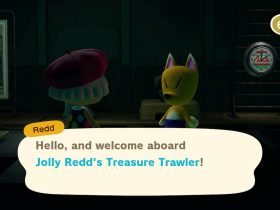 Imagine having a lovely home cooked meal prepared for you by Delia Smith straight after watching her sprint outside and punch an adorable little bird right in the face. Well, as it turns out, Battle Chef Brigade is the closest thing you can ever get to that incredible pipe dream. It also happens to be one of the finest servings that the Nintendo eShop has to offer.

100 years ago, hostile monsters began to raid the world of Victusia, attacking its people and eradicating the animal population in the process. The king, along with a famously renowned chef, formed a squad of culinarian commandos to control the situation. As a result, monster dishes have become a part of Victusian heritage ever since. You mainly play as Mina, a talented chef who cooks in her family restaurant and yearns for the opportunity to put her skills to the test. So, what better way settle her ambitious craving than to compete in the annual battle chef tournament, and become a part of Victusia’s elite forces. 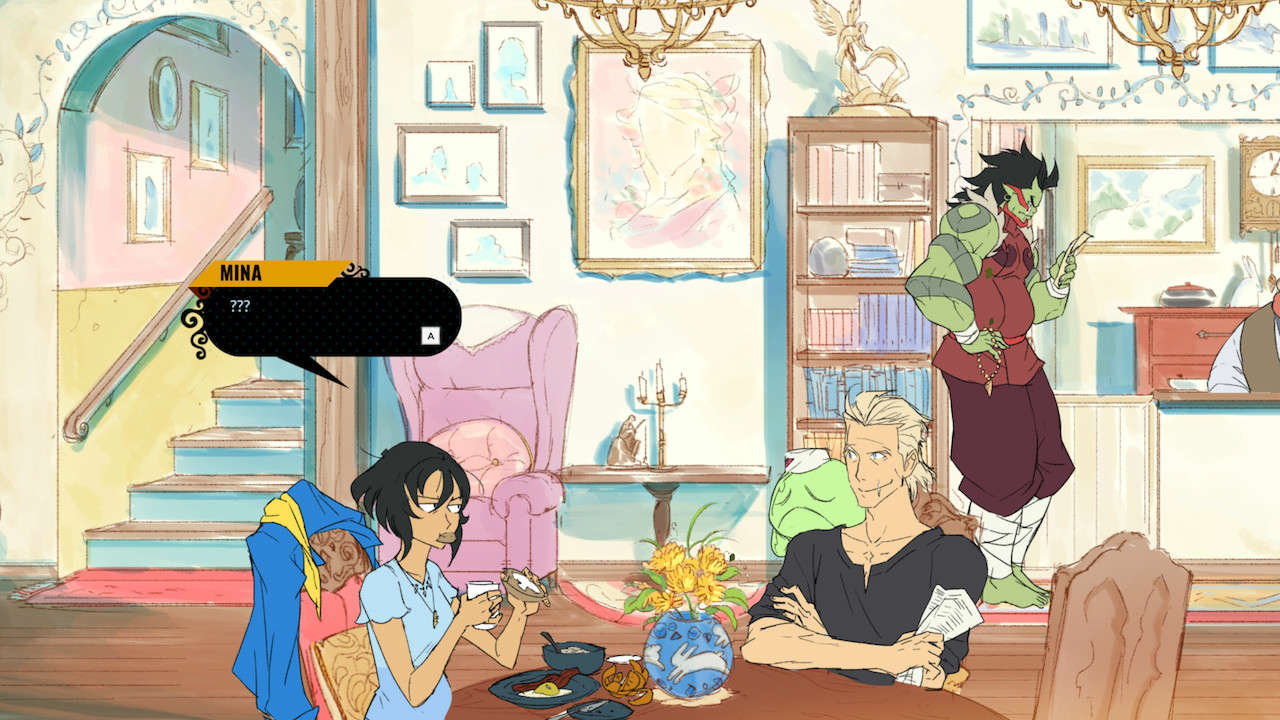 Developed by Trinket Studios and published by Adult Swim Games, this little indie title manages to boil puzzle, platforming and fighting mechanics together, while seasoning it nicely with a charming script and gorgeous art style. The premise is simple, go out and hunt for your ingredients by beating up monsters to a pulp. You bring what you have gathered back to your cooking pot and match three elements together in order to strengthen its flavour. Once ready, you present the dish in front of a critic who will mark your meal accordingly. Whoever gets the highest score, wins.

It’s like an episode of MasterChef crossed with a Studio Ghibli tale as you work to concoct something up under a strict time limit. There’s usually a theme of the dish based on a newly introduced beast to hunt down, along with a preferred element of taste favoured among the judges. There are three main class elements found within your ingredients, being fire, water and earth. You stir up to four elements in rotation to try and match a line of three colours. When combined several times, the flavours of the matched elements improve the overall quality of the food.

Unique pots with special buffs can be acquired through your adventure to take advantage of the ingredients. Take an earth pot, for example, that will combine two green elements instead of three. The downside, however, is that it will not allow you to combine anything else. This leads to the strategy on how you approach each cook-off. Before you know it your juggling several dishes across three of your elected pots, trying to serve a delicious dish to victory. 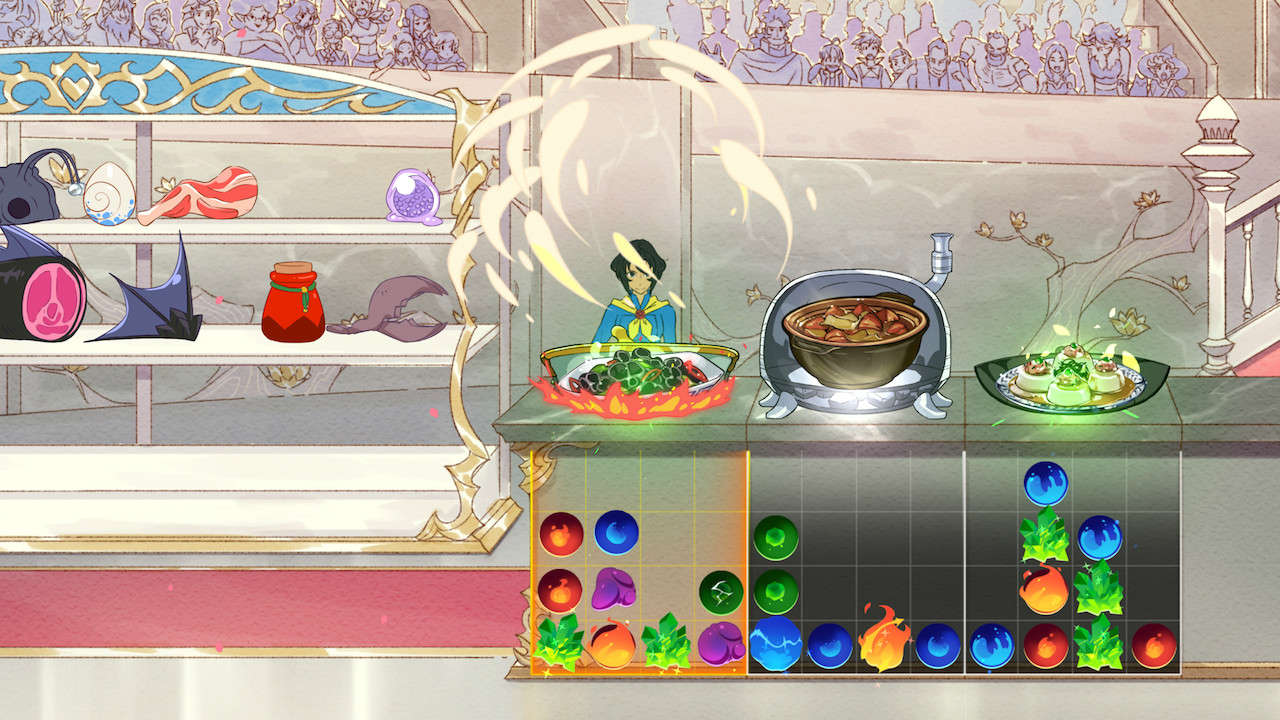 The puzzle mechanics aren’t just restricted to the duels, however, as there are jobs that you can do around the town to earn coin to buy new cookware. Take Belchior’s lab for instance, where completing a set of puzzles to help the cat-loving chemistry professor with his research will earn you a few quid in the process. While the plumpy Potinda has you cooking up a feast in her busy restaurant. These sidequests work as a good way to explore the possibilities on how to implement combinations, and they also give you a bit of a breather from duels so they don’t start to feel stale. Implementing the whole match three feature to represent cooking may seem safe, but in fact, it’s a clever little concept that works extremely well. You quickly start to feel like a chef as you improve the dish with every stir. The puzzling stays fun and varied throughout, especially when the gameplay twists with the formula a little later on in the story.

Of course, you can’t actually cook anything until you have undergone a monster hunt. As soon as your timer starts, you can leg it into the realm any time you want to gather the key ingredients for your cuisine. Thankfully, the combat itself is quite shallow and doesn’t distract you too much from your overall goal. The depth lies more in your combination of attacks as you try to kill each critter as fast as you can. The larger enemies are, of course, a little more aggressive but also contain better ingredients. If by any means you do get taken out by a monster, you start right back at base with a small time penalty. The addition of the hunting component does add to the pressure especially when making that last minute decision to quickly nip back out to give your dish that final touch.

The writing that’s baked into the plot doesn’t take itself seriously, yet is well-penned with an array of supporting characters full of personality and comic relief. One ally, in particular, includes a big powerful ogre named Thrash who you take control of later on in the story and strangely reminded me of Ray Jackson from the Jean-Claude Van Damme movie, Bloodsport. There’s fairly decent voice casting pretty much throughout that plays out like an English dubbed anime. Even the poorer attempts at accents manages to somehow fit well within the charm of Battle Chef Brigade. 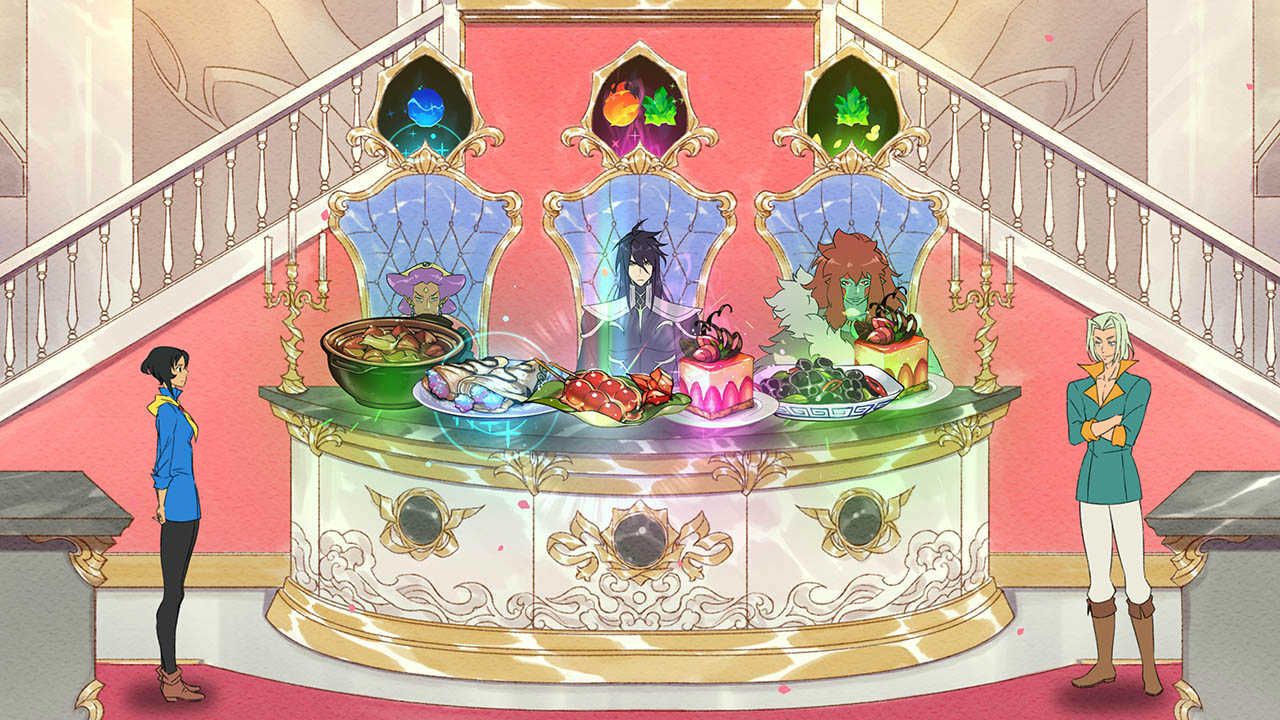 What I did fall in love with was the art style. It’s beautifully drawn with characters matching the glorious watercolour backgrounds gracefully. The animation in the combat looks fantastic and despite the restriction of character poses in a conversation, each illustration is expertly crafted to fit in well with most scenarios. I did run into a few frame drops during hunting, but nothing that really takes away from the overall experience. The audio is as equally impressive. Just listening to the sound of Mina clicking her fingers to start the pan boiling is as satisfying as snapping your Joy-Con onto the switch. I also loved how I could feel the pan bubbling in my hands with the HD Rumble, which was nice little addition to put the cherry on top.

The only big criticism that I personally had with Battle Chef Brigade was with the lack of a live competitive multiplayer. To not have the ability to duel against somebody either split-screen or online is a massive shame. Fingers crossed it becomes a feature added somewhere down the line. You can try and beat the high scores in a daily cook-off, along with leaderboards for several other extra single-player challenge modes. Although it would have been great if you could at least search and compete with your friends’ scores as well – maybe even save their best ghost replay of some kind to face against at leisure. Another small discrepancy lies in the gameplay formula. While there’s only so much you can do in a game like this, it does tend to get a bit predictable on how your tasks are laid out. However, it didn’t really deter the level of fun I had with this great little title overall.

As a whole, Battle Chef Brigade puts a refreshing spin on the match-three puzzler. It manages to do for cooking sims what Phoenix Wright did for the courtroom adventure. The cook-offs are tense, the level of polish is fulfilling and it all looks glorious when played in Handheld Mode. I would go as far as saying it’s one of my favourite games this year and one of the better games to come out of a Kickstarter campaign. In fact, it has even tempted me to take charge of Christmas dinner this year. Although I very much doubt that my better half will let me.