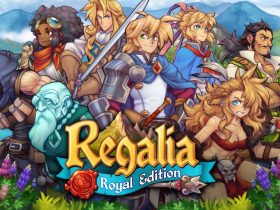 Repay Your Kingdom’s Debt In Regalia: Of Men And Monarchs – Royal Edition On Nintendo Switch

QubicGames has revealed that Astro Bears Party will soon see release as a Nintendo Switch exclusive.

The competitive party game stars bears in space suits and it is pitched as an easy-to-learn but a hard-to-master game that challenges players to run around a planet while avoiding each other’s Magical Beary Ribbons.

With the chance to jump and hover over the ribbons using a jetpack, players can dash in an effort to catch their opponents out.

There are four Bears each with their own playstyle, with, unsurprisingly, local multiplayer supporting up to four players. With a single-player mode called Jetfish Hunting in which you can look to beat your own records, the developer has also worked on implementing HD Rumble support.

Astro Bears Party will release on the Nintendo eShop for Nintendo Switch in Europe on August 31st.