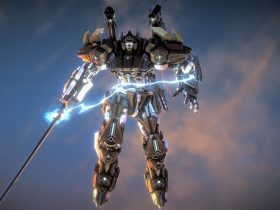 The port, which has been created in collaboration with developer Abstraction Games, was shown running live on the portable home console during the Epic Games “State of Unreal” keynote at GDC 2018.

In ARK: Survival Evolved, you will tame dinosaurs, conquer enemies, and create enormous structures, delivering hundreds of hours in which you will explore, craft, and fight for your survival alone or with a group of other Survivors.

The Nintendo Switch version has the complete contents and features of the original game, whether that be the massive and mysterious ARK island to the more than 100 prehistoric and fantasy-inspired creatures such as the T-Rex, Giganotosaurus, Rock Drake, and Reaper.

“With this new version, Switch players can go directly from hunting and taming while sitting on the couch, to forming online tribes and searching out new conquests when on the bus, waiting in line, or wherever they happen to be.”