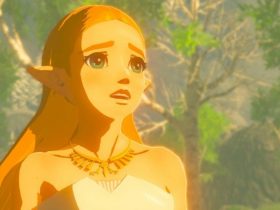 Zelda’s Lullaby Hidden In The Legend Of Zelda: Breath Of The Wild’s Hyrule Field Theme

Zelda series producer Eiji Aonuma has touched upon demand for a remake of the rather dark Majora’s Mask.

Fans called for Nintendo to consider doing so after how well received Ocarina of Time 3D became, although the company instead decided to pursue development of an entirely new Nintendo 3DS entry for the series in the form of A Link Between Worlds.

“You’ve heard rumours? [laughs] Hmm, I wonder! [laughs again],” Aonuma explained to Nintendo Life. “Majora’s Mask is a very special game – it’s the real hardcore who like that one.

“If we were to make a remake of that one then we wouldn’t want to let them down. We’d have to put our heart and soul into it. So, you say you’ve heard rumours, but I have to say it would be quite a commitment to do that.”

That being said, it is unknown what Grezzo, who were responsible for updating Ocarina of Time 3D, are currently up to. Although with A Link Between Worlds on the way, Nintendo will surely save releasing a potentially existing Majora’s Mask 3D remake until further into the future.