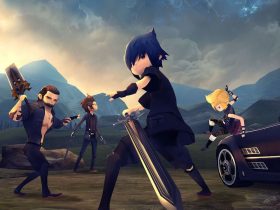 Sprite has announced that Aokana: Four Rhythm Across The Blue will see release on Nintendo Switch, a romance visual novel in which players assume the role of Masaya Hinata.

Gematsu reports that when placed in the Nintendo Switch Dock, the visual novel will support full HD resolution.

It takes place in an alternate universe where Grav-Shoes have been invented that, thanks to their anti-gravity properties, let people freely fly around.

This leads to a sport being created called Flying Circus, where participants race between buoys or touch their opponent’s back to score points. Hinata used to play but went on to quit when he was beaten too often, although, when Asuka Kurashina transfers to his school, his luck soon starts to change.

With a branching plot line with multiple endings, the player’s decisions will redirect the narrative in a specific direction.

Aokana: Four Rhythm Across The Blue will release for Nintendo Switch across Japan this winter, with first-print copies to have a specially-illustrated case.