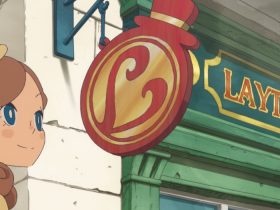 Nintendo has announced that a free software update for Animal Crossing: New Horizons will be made available on Thursday 23rd April.

This update will add new limited-time seasonal events to the game, introducing new characters such as Leif and Jolly Redd as well as a Museum expansion.

The content that you can look forward to will include:

Jolly Redd’s Treasure Trawler – After downloading the free update, Jolly Redd will occasionally show up in his boat to sell in-game art and unique colours of furniture to players. The furniture colours are not available in Nook’s Cranny. Like in previous Animal Crossing games, players will have to figure out which art pieces are real, and which are forgeries.

After purchasing genuine art, players can donate it to the island museum to open an art gallery, which will display all types of donated pieces, from paintings to sculptures.

Nature Day (23rd April 23 – 4th May) – During the Nature Day period, special Nook Miles challenges will be available that focus on nature-inspired goals, such as planting trees and watering flowers.

May Day Tour (1st – 7th May) – In the first week of May, players can use a one-time May Day Ticket at the island airport to head out on a limited-time tour to an island that looks different than the usual mystery island tours. A special visitor who looks familiar might also be there…

Wedding Season (1st – 30th June) – During a nuptial-themed June, players can visit Harvey’s island to meet the married couple Reese and Cyrus, as well as help arrange and take anniversary photos with them in the wedding-picture studio. Players will get wedding-themed items as a token of the couple’s gratitude.