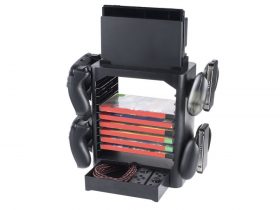 Digerati and Fantastico Studio have announced that Black Paradox will release on Nintendo Switch, a galactic side-scrolling roguelite shoot ’em up.

Playing as the infamous bounty hunter Black Paradox, you must travel throughout space to defeat the most dangerous criminal organization in the galaxy: the Hellraisers.

This ultimate galactic showdown will see you unleash weapons, power-ups, drones, and other upgrades, as you fight for survival against waves of enemies.

“Flying space cars, masked bounty hunters and big bad bosses. All spiced up with pixel art and a synth-wave soundtrack. That’s what we wanted to bring to our game with Black Paradox!” enthuses Fantastico Studio CEO, Daniele Bianchini. “We think the roguelite shoot ’em up genre hasn’t been explored enough and Black Paradox brings a fresh take on it.”

Black Paradox will release on the Nintendo eShop for Nintendo Switch worldwide on May 3rd.