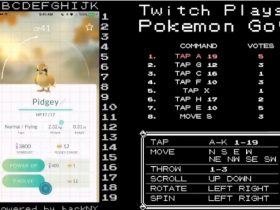 Twitch Plays Pokémon GO Wants To Be The Very Best

Nintendo of America can celebrate success, announcing that 3DS software sales for the year are up by 45 percent in comparison to 2012.

That was largely spurred by an enviable software line-up for the year that included Animal Crossing: New Leaf, Pokémon X & Y, Mario & Luigi: Dream Team, and The Legend of Zelda: A Link Between Worlds.

With early 2014 seeing the release of Bravely Default, Professor Layton and the Azran Legacy and Yoshi’s New Island, such success looks set to continue.

“Nintendo 3DS is a powerhouse with games and experiences that appeal to all kinds of players,” comments Scott Moffitt, Nintendo of America’s executive vice president of sales & marketing. “We’re not slowing down in 2014. With more games featuring fan-favorite franchises on the way, the best days of Nintendo 3DS are still to come.”