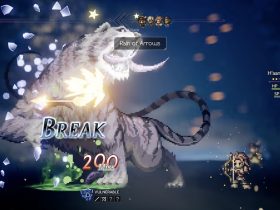 When I first saw a single screenshot of 12 Is Better Than 6, it caught my attention. Then when I saw it in action, my mind immediately thought of Hotline Miami – a game which I absolutely adore – so I knew I just had to play this one. After playing, it is clear to me that it does indeed draw heavy inspiration from Hotline Miami. And, while it was never realistically going to hit the hefty heights that game had, I still found it to be a joy to play through, if a little repetitive nearer the end.

There isn’t much in the way of a story here, or at least a story that you should care about. All you really need to know about your character is that he is a rather violent chap who kills as many people as he can in order to progress through each level. It is as simple as that. Why does he have to kill so many people, you ask? Well, he is a prisoner who has escaped, now on the run from his past and is traveling to Texas, looking for freedom. So it’s kill or be killed.

It plays as a top-down shooter in a very similar vein to the brilliant Hotline Miami. If you have ever played that game, you will know what you’re getting here. Everything is pretty much a one-shot, one-kill situation and that goes for you and the enemy. You go from screen to screen, taking out (for the most part) everyone you see before moving on. 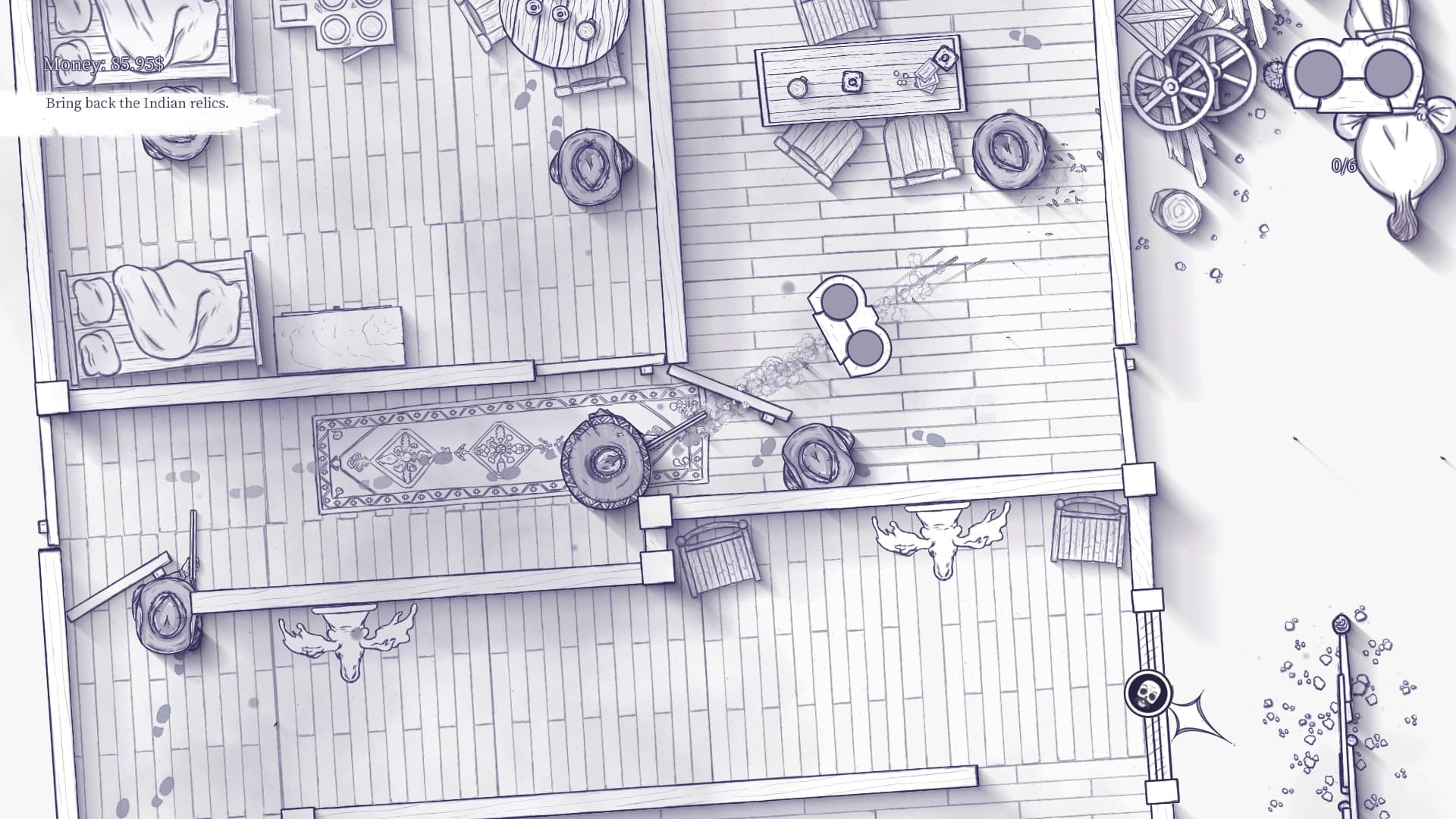 With it being a Western game, it wouldn’t be right if it didn’t have some common firearms of the times, like the repeater rifle or the revolver. Using these weapons isn’t as simple as just pressing the fire button over and over to kill enemies, you first need to cock and reload your weapons manually. At first, it is a bit finicky and awkward because it’s something we’re simply not used to in games, as rarely do we see something like this implemented. Once you do get the hang of it (which isn’t that long, in truth), then the gunplay feels very satisfying indeed.

Melee combat is what lets the game down more than anything else. It is an aspect that Hotline Miami got so right, which only highlighted it even more to me. You aren’t able to hide around corners and jump out at enemies when they walk past, for example, because the melee attacks just don’t work properly. In order for you to get a one-hit kill with a melee weapon, you need to be behind the enemy or they need to be sleeping. You aren’t able to throw weapons here, either. Further solidifying the fact that a gun is your best bet when it comes to 95 percent of the enemies.

You will die an awful lot during your playthrough, but that is what this type of game is all about, as top-down shooters are notorious for being difficult. It’s meant to be like this and at times you will develop a bit of anger, but as soon as you finally kill everyone in sight and make it through a level, it’s a jubilant and blissful moment. 12 Is Better Than 6 also does a great job of getting right back into the action once you have died, no loading, no waiting around, just a simple tap of the trigger and you’re off again in an instant. Because of this, it gives you that ‘just one more go’ mentality as you don’t even get the chance to think about quitting. 12 Is Better Than 6 is incredibly addictive because of this. Five-minute goes can turn into 30-minute sessions, it is so hard to put down. 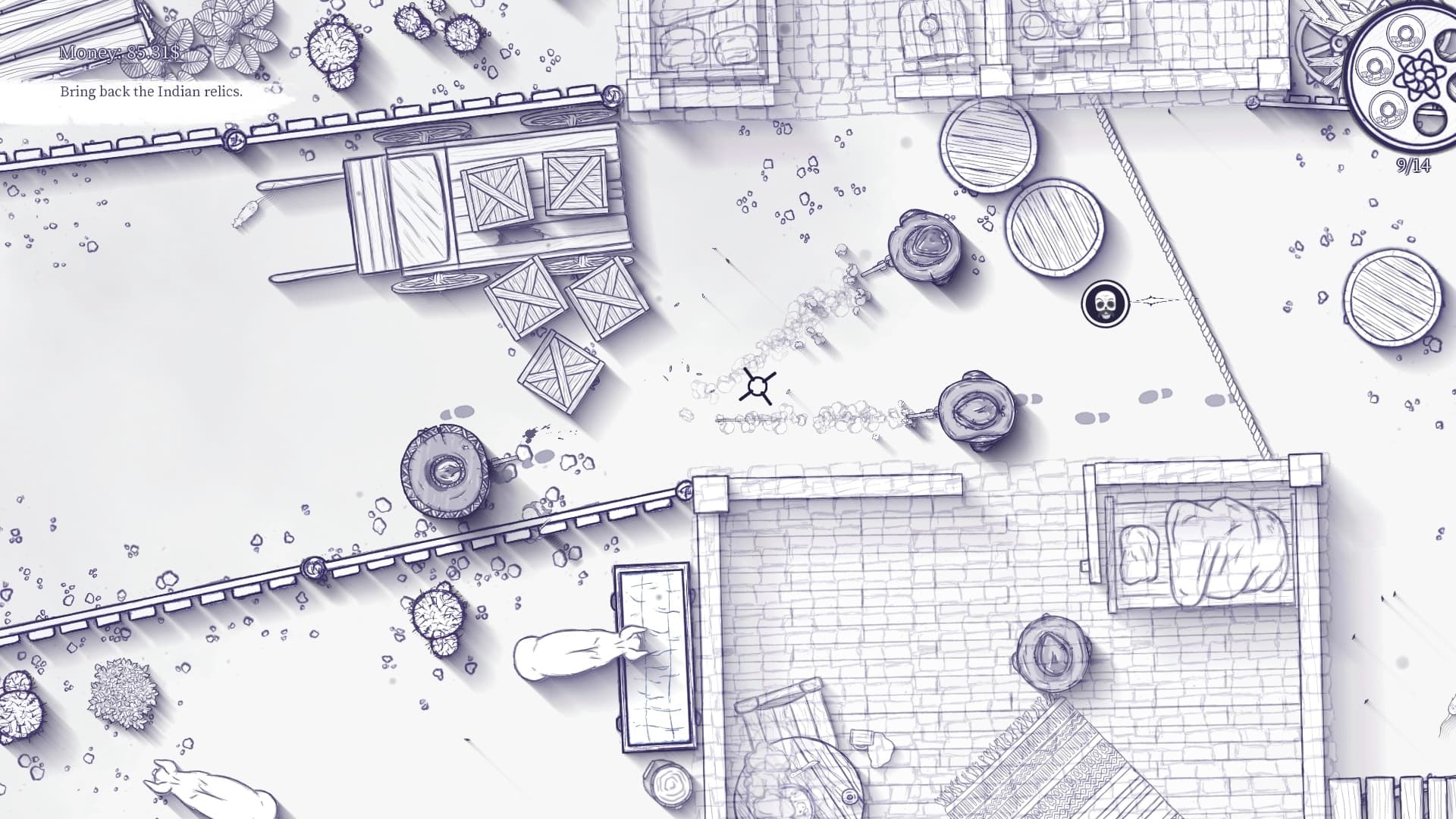 To break up the gameplay slightly, every now and then you will come across a town that, for once, isn’t hostile. Here, you are able to pick different weapons, earn extra cash in a few extra side missions and purchase upgrades, which is the big one. The upgrades are well worth your time, effort and money as they generously improve upon your base character. The first upgrade, for example, is the ability to hold double the number of weapon cartridges, which not only means you spend less time searching enemies for bullets, but means you can take out a bigger haul of enemies without the need of another weapon.

The entire game has a wonderful art style that I cannot get enough of and it fits the game perfectly; it is all hand-drawn, black and white with a surprising amount of smaller details. The only color the game has to offer is a smattering of red whenever you slaughter a foe. Which only helps to emphasize just how many enemies you have had to kill on your journey. The only bad thing I can say about the art style, especially early on, is that it can be quite difficult to make out some enemies. It is hard to tell if you have seen an enemy or a rock and I know that sounds a bit silly, but trust me, early on I would often walk right past enemies because I thought they were just part of the décor.

12 Is Better Than 6, unfortunately, suffers from a bit of slowdown in both handheld and TV modes on Switch. These moments happen when there are many enemies on screen at once. And while it isn’t a major issue, it can be a bit jarring, especially when you have five or six of them converging on you at once and you need to act fast and precise.

The first thing you will notice is the art style and what a brilliant art style it is. Look beyond that and here lies a game that is not only addictive but also super fun to play, too. It is just a shame that the thrill I had during the first few hours, didn’t carry over into the later hours of the game, as it does get a tad repetitive as you make your way through. Having said that, I didn’t feel like I ever wanted to stop playing. Every time I died, I just had to have one more go. Considering Nintendo fans don’t have Hotline Miami to fire-up on their Switch, 12 Is Better Than 6 cocks its gun and shoots its way up towards the top as one of the best in its genre. You don’t want to miss out.